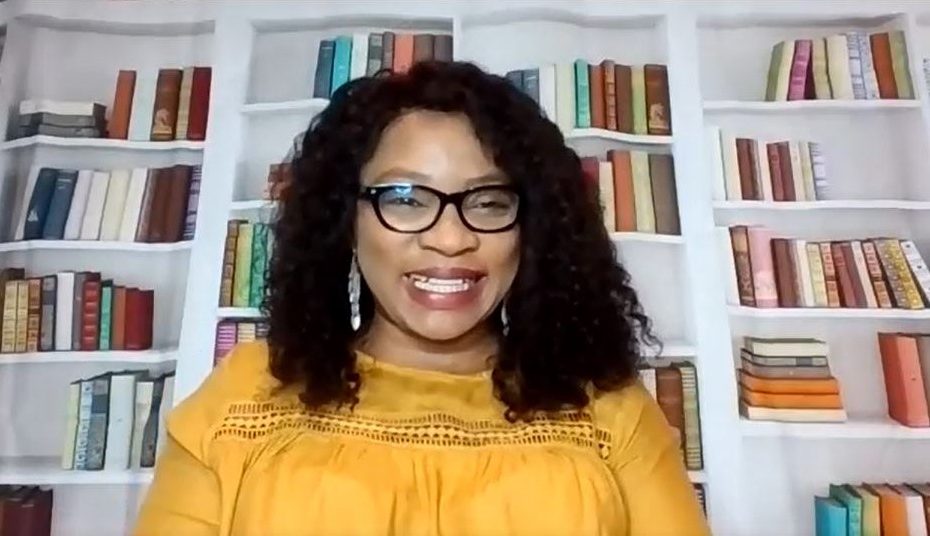 This month, Delft MaMa talks to social entrepreneur and author Florence Igboayaka, to hear how she is tackling period poverty, a situation where hundreds of millions of women and girls around the world are unable to afford sanitary products and lack access to clean and safe toilet and washing facilities.

Period awareness advocate, Florence Igboayaka is set on tackling period poverty around the world. She lives in Aberdeen, Scotland, a bit too far from Delft to meet in person, so we zoom.  When she appears on screen, Florence looks radiant in a gold top. She greets me with a friendly smile and speaks with an accent which I discover later is from Nigeria.  It’s a busy time for her as she prepares for the 2021 Limitless summit where panellists will discuss ways to support communities in tackling period poverty. This year, the summit coincides with Menstrual Hygiene Day. Observed annually on 28 May, it’s a day to raise awareness of the challenges that women and girls face due to menstruation and period poverty.

When Florence started writing The Period Comic to help teach girls about periods and puberty, she never imagined it would end up an Amazon bestseller. For her, it was evidence that there was an educational gap that needed filling. It was validation that she needed to do more.

The Period Comic is an illustrated book written for children ages 8-14.  It’s about three young girls from diverse backgrounds, Anabel, Ada, and Misha, who go on an adventure together and learn about their bodies, puberty, and periods.  The book covers topics such as growing breasts, acne, hair in private areas, feelings, nutrition, managing period cramps, preparing for your first period, period poverty, and more.  The book has been reviewed and approved by a gynaecologist, and uses clear and simple explanations.

“I wanted something [girls] would love to read about and would be interested in,” she says.  “When I wrote it, I got young girls from age nine to review the manuscript… and with their feedback, I knew what resonated with them.“

When Florence moved to the UK, she was surprised to find that mothers were not talking to their daughters about periods and puberty.  She says, “A lot of them were like, ‘I’m not sure how to… I don’t know how to start that conversation’… That was surprising because I thought it was only when I was a young girl, but the truth is, it’s still happening today.” Florence sees her book as a tool to help parents talk about puberty and periods with their kids.

why period & puberty education is important

When I ask Florence what inspired her to write The Period Comic, she tells me about her childhood.  She was born and raised in Nigeria, the youngest and only daughter in a family of four sons.

“I was the tomboy in the family, the girl jumping around with boys,” she replies.  “My dad was my role model; I used to look up to him.  We used to talk a lot, you know, daddy’s girl kind of thing.  So when I came into puberty, he was the one that talked to me about periods.  I would go to him and ask questions, but he didn’t do a great job at it,” she laughs.

Reflecting on her past, Florence knows that puberty is a very sensitive time for young girls.  “If you are not taught right, and you are not sure… you don’t understand the changes in your body, it could affect how you feel about yourself.  You might dislike yourself… and I was like that,” she recalls.

“I was ashamed of myself and my body…  I don’t want people feeling the same way.“

Over time, Florence regained her self-confidence and set up the Fortunes Dynamics Foundation, a charity which helps children in vulnerable situations.  This is when she uncovered the problem of period poverty.

“I started a charity back in Nigeria supporting young girls… The focus at the time was formal education for children from single [parent] homes or who were struggling and living [in] poverty… also children who’ve lost their parents, orphan girls… I focused on education. That was what the charity was doing,” she explains.

She continues, “But what we were doing evolved over time. Because the more we engaged with the girls, they felt more free. They felt they could speak with us. And we start having counselling sessions, because for girls there is more to life outside of formal education. So we started speaking with them, and they began to open up. And one of the things they were asking for help [with] was underwear, and period products. And that was how I started investigating periods and period poverty… I realised that education, and conversations about periods are very important to tackle the issue of stigmatisation… so that was when I decided to write a book.”

“Period poverty affects women and girls all over the world.  Access to sanitary products, safe, hygienic spaces in which to use them, and the right to manage menstruation without shame or stigma, is essential for anyone who menstruates. But for many, this is not a reality.“

Florence says the charity, “gives girls period packs where we have underwear, soap, a pamphlet. We have washable pads. I brought some widows into the charity. We empower them. They produce the pads, and we give them to the girls.”

Florence is unstoppable on her mission to tackle period poverty.  She has just launched The Period Place, a non-profit focused on promoting education and awareness. The organisation will offer free online period workshops for dads, led by medical doctors.

“The aim of The Period Place is to promote period education and awareness and also advocate against period poverty,” she says. “As far as I’m concerned, period poverty is not only the lack of access to period products, but also stigmatisation, lack of understanding, lack of education. It is all part of [period] poverty.”

“We want it to be open to anybody, not limited to people living in the UK,” she explains.  ‘What about the girl who only has a father? What about the girl who doesn’t have a mother? So we’re starting free clinics for dads …to help them know how to have the conversation with their girls. Because a lot of times it’s the mum who runs off to buy the tampons; it’s the mum who goes to buy the period products.  Dads are really not involved.”

tackling period poverty as much as she can

Her book, The Period Comic is available through amazon.nl, the book’s webpage, amazon.com, or bol.com.

Do you want to know more about period poverty and Menstrual Hygiene Day? Here are some resources:

If you enjoyed reading about Florence Igboayaka, you will probably like this post about Delft MaMa’s founder, Lucie Cunningham.

Cindy is a former architect and project manager who appreciates good design, good books, and spending time with family and friends. After growing up in Hawaii, she left to see the world and never looked back. Now settled in the heart of Delft, she enjoys the gezellig life, Dutch cycling culture, and making things from scratch.