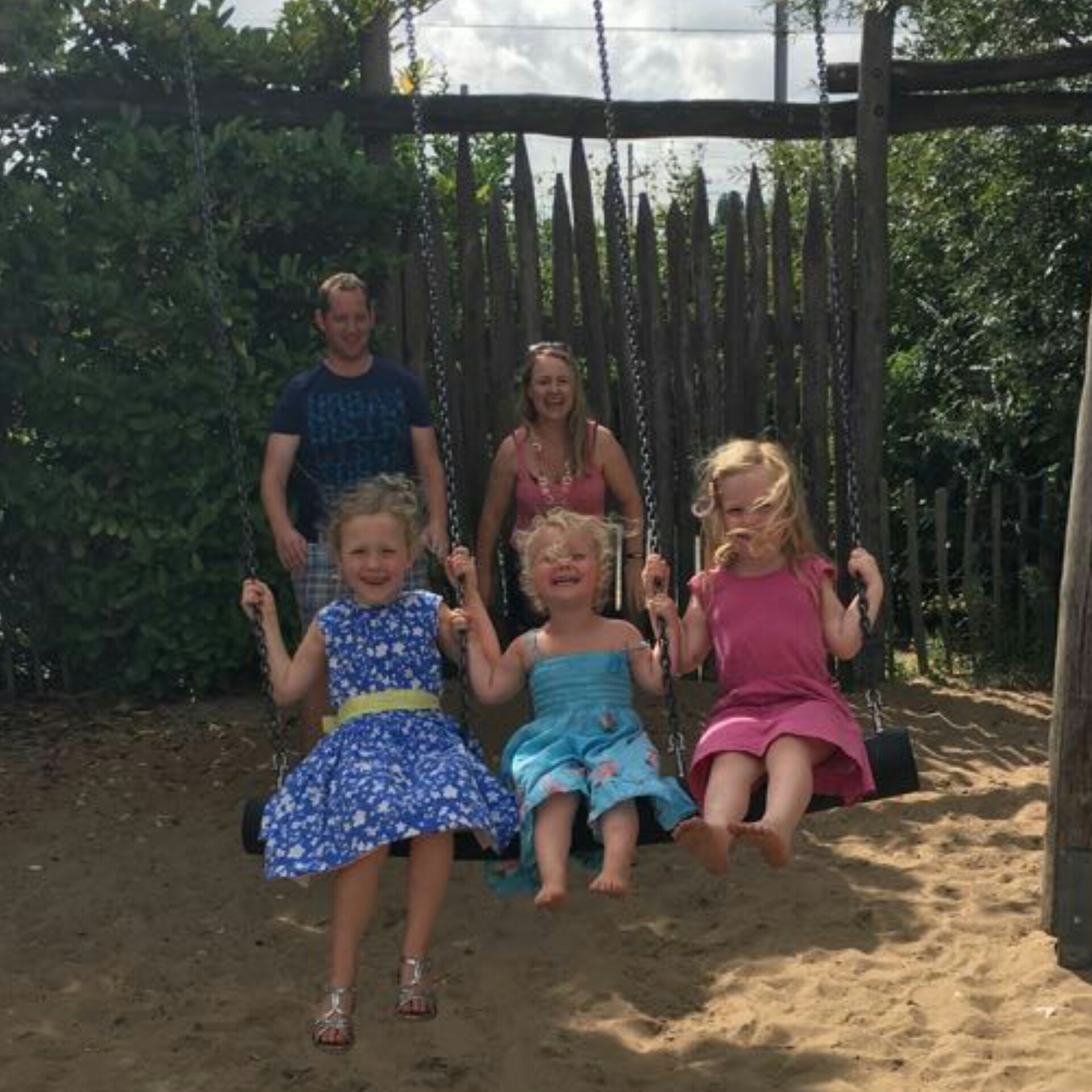 Whenever I interview moms of the week, I ask them to nominate one or more mothers to feature in the future. This time I was going to meet with one of those mothers who has been recommended to me over and over again. Manuela is well known among Delft Mamas, not least because of her collaborations with other mothers for work. She’s a mother of three girls: a six-year-old Sophia, Mireya who is almost five and a three-year-old Elodie. When she moved to Delft in 2010, she knew from her several previous moves that she needed to find a community around her the sooner the better, and she was referred to Delft MaMa where she instantly found her place.

It all started back in 2003 when Manuela had given up on men and wanted to travel. Ironically, this was the moment life presented her with her future husband, Sean. “When I was younger, I wanted to have a career. I felt that one day I wanted to have a big job, make lots of money and fly around the world. I had all that where I worked. It was exciting, but after a couple of years I started to wonder if this is really it.” Manuela resigned from her work in London and the person she ended up handing her job over to was Sean. Despite feeling they belong together, he encouraged her to stick to her plans to travel the world, so she took upon the adventure. “He was amazing. He said “we are good anyway, you go traveling”. I planned to go for ten months, but after seven months I came back. I traveled over land from London to Cairo. I visited the Middle East, including Syria, Egypt, Jordan. From there I flew down to South Africa, where I did the southern tip of Africa, including Namibia, Botswana, Zimbabwe and many wonderful places. Then I went to India, Nepal and I ended up in Thailand.”

Manuela’s trip reminds me of Elizabeth Gilbert’s ‘Eat, Pray, Love’. She joyfully laughs at the notion and says it’s not far-fetched at all. “It was a bit of a soul searching trip; I found my profession during the trip. I spoke to all these people about their careers. In Thailand, at the very last leg of my trip, I spoke to somebody and they said I sounded like I should be a coach. I had never even heard of coaching.”

Currently Manuela has three companies: her company m-quest gives leadership training for men, Open The Door concentrates on improving women leadership skills and To Love Live & Learn is aimed at couples who want to re-connect. Manuela loves learning and everything she teaches is personally driven. “All the things that I know is because I struggled myself with those same things. I didn’t have any leadership skills: I’m the third born in my family ended up becoming the perfect pleaser”, she adds. Manuela had to learn firsthand how to be assertive and how to influence people. She has done confidence coaching, happiness coaching, sales coaching and individual coaching before she found the area of leadership coaching. “Sarah Brown and myself decided to have a Lean In -circle with our friends and discuss about things such as, why when you go up the ladder as a woman, your likability decreases, whereas for men it increases. We talked about the myth of ‘having it all’, and realized we can learn from each other. Witnessing the positive effect our informal meetings had on us participants we could not help but think we should do something in a larger scale.” Soon enough Manuela co-founded the one and only TEDxDelftWomen thus far.

Manuela oozes effortless confidence. Years ago she used to be afraid of failure, but it no longer holds her back. She refers to a story about Edison and how he – while inventing the light bulb – experimented over a thousand times only to figure out how it didn’t work, until he found a way that it did work. “What kind of an attitude is that? That’s brilliant!” she says and continues with another example: “Look at your children. When they start walking, they’ll land on their bums every time at first. Do they go “Oh, I obviously wasn’t made for walking, I’m going to crawl for the rest of my life.” It’s ridiculous! At some point along growing up, we think “tried it once, it’s not working, I’m obviously not good at this, not gonna try this again.”

Manuela drops author names, book titles and influencers. When talking about insecurities, she refers to her favorite TED talker, Brené Brown, who gave an inspiring talk about The Power of Vulnerability. “Brown says that everybody can be brave, if you’ve got a base of friends and connections you can return to. If somebody says something or I face a challenge or a setback, I will brainstorm with people who’ve been there and who are ‘in the arena’ with me. Not the people who watch from their seats, but the people who are fighting the fight. And of course sometimes the feedback is accurate, and then you go and change something”, Manuela explains.

Our mom of the week calls herself a creator-connector. She reads a lot, researching about topics she finds interesting, always falling deeper into the rabbit hole. It’s clear Manuela loves doing what she does and looking at how many people referred her to me after doing several workshops with Delft Mamas, she clearly is very good at what she does. “I believe in strengths, Marcus Buckingham style. He defines strengths not as something you’re necessarily good at, because you can be good at doing invoices or cleaning the toilet, but ideally you’d never want to do it again. He says a strength is something that energizes you, even if it’s tiring, even if it costs you effort. Strength is something you’ll always go back to.”

Curious where this rabbit hole goes? You can continue by following her on Facebook.

2 thoughts on “Delft Mama of the week: Manuela”