A tale of two tongues: raising a bilingual child

Reading this piece, I’m struck by the similarities in behavior between my own multilingual 4 year old and Kathryn’s Lucas. Particularly when I misunderstand something V has said, hurt expression on her face, she throws up her arms and says, “NOOO, Mama! I MEEEEEEEANNNNN….!” and gives a big sigh, looking around as if the right words will pop out of thin air. Our bi/multilingual children are growing up with amazing elastic minds with the ability to move between languages. It doesn’t mean, however, that communication is smooth from the start. How many of you can relate? Join us as Kathryn Roscoe shares some of her own amusing observations raising a bilingual child.

I never expected to be living overseas with a partner from another country. I often look at my life and get the Talking Heads song Once in a Lifetime in my head (‘and you may ask yourself… well, how did I get here??’). One of the byproducts of this unexpected life is a kid who has a foot steeped in two languages. I know for the expat community here being bilingual is as dull as being monolingual in normal circles, but for us it is still a quirky, amusing, and sometimes challenging situation.

For this post I dreamt of collecting dozens of anecdotal stories of the funny mishaps we notice in our multilingual kids. However, lack of stick-to-it-ness combined with a no-market-research policy on expat forums kicked that dream to the curb, or at least put it on the back burner.

Instead, I am sharing some of my own personal collection of language weirdness that emerges from my 6 year old’s half English, half Dutch brain. I invite you all to write your stories in the comments… Perhaps we can get that bigger-picture anecdotal humor feast prepared for a future post!

Welcome at my life (and other language quirks)

This evening, my husband and I picked up Lucas from after-school care, and—as every time—he left half his things in the classroom, so we ventured to the classroom to collect. I actually revel these moments, because the classroom is perfectly still, all the chairs up on the tables, with the slippers (half of which are over-sized plush puppy dogs) piled neatly on top. It’s everything I love about his classroom without all the chaos and claustrophobia of the drop-offs and pick-ups. Today he had a paper on his desk, with math problems he’d solved that day. He brought it out, and we took a picture and then told him to put it back, because he probably wasn’t supposed to bring it home. On the verge of tears he explained (as if terribly injusticed): ‘They ARE to bring home. I got them from the uitdeelmand, and I didn’t want to bring it to the NSO because I didn’t want to lose it so I put it here, but the juf gave it to us from the uitdeelmand and if it’s from the uitdeelmand that means you get to bring it home!’ The repetition of this one Dutch word in an otherwise English justification was so incredibly endearing, that we couldn’t even correct him. Just hug him and say: ‘well I didn’t know THAT.’

Another one is afspreken, or afspraak. We don’t even try to translate this one, and even I use it in my English sentences now. My inability to find the words for it probably stem from the fact that this phenomenon of school-aged children arranging play dates for themselves (which also often actually come to fruition) was completely unknown in my Miami upbringing. Playing with friends on a school day was usurped by after-school activities and made impossible by large unsafe distances between houses and parents who worked. But, I digress. Every single pickup, I get some variation of ‘Can I afspreek with Liam? But I want to do afspreken at my house, and it’s my turn, but he only wants to do afspreken at his house.’ I respond in a similar warped version: ‘well, maybe you can afspreek by him this time, and he can come to our house for an afspraak next time.’

Lucas will often tell me he’s going to ‘leave a fart’ (‘een scheet laten’ = to fart), to ‘do my shoes out’ (‘doe je schoenen uit’ = take off your shoes), or ask me to help him ‘room up’ (‘opruimen’= clean up). Sometimes he’ll ask us to remind him ‘what we were having it over’ (translation: what we were talking about). Sometimes he likes to play that game ‘which one of these things doesn’t belong’ (e.g. shoe, slipper, pickle, boot). He will make up his own—often blindingly obvious, sometimes obscurely challenging—groupings. Once he named four seemingly unassociated items; these were something like: bird, my pencil, Liam, a banana. After giving up he told me ‘a bird, because the rest I saw yesterday’. He often opens this game by asking me ‘which of these things doesn’t hear by the others?’ The first time he did this I was genuinely perplexed. What could this question possibly mean? And then I realized ‘bij elkaar horen’ means to go together in Dutch, but ‘horen’ also means to hear in English. These conflated to ‘which one doesn’t hear by the others’.

A word by any other name

My husband is a compulsive word-player. If anything sounds remotely like anything else (in any other language) he can’t let the joke go. This hobby seems to have been passed down to my son, who has a father named Fer (pronounced: Fair), and a grandfather named Lucky. We are all trained to say ‘fortunate’ in our house, because if you say lucky he’ll reply automatically ‘you’re not my grandfather!’ And should I mention that something isn’t fair I get a quick ‘you’re not my dad!’ That has us all using ‘eerlijk’ (the Dutch word for fair) even in English.

My son has a mind of his own and is very stubborn with what he believes, no matter how weird or incorrect it is. For example, when he first discovered Michael Jackson’s I’m Bad in the movie Megamind, he LOVED it, and sang for days, ‘you know umbair, umbair, you know it, you know’. Trying to convince him it was not umbair, that umbair didn’t actually MEAN anything, was fruitless and just caused frustration all around.

And then there are the Dutch words that are so cute or great you don’t want to correct or eradicate them from our English talk. Kietel for tickle, knuffel for hug, gekkie for a little crazy. Even some bad words, like ‘flikker op’ which I understand is a much milder version of ‘fuck off’, but feels just as satisfying to say. And, as an adult living in a foreign language world, I have my own favorites that seem to have no equivalent in English. Aandachtspunten, meevallers and tegenvallers, uitgangspunten, and of course the now famous gezelligheid.

I don’t really fight the infiltration of Dutch into English, or vice versa. (Don’t get me started on how pervasive his English words are in his Dutch sentences!) I am only strict about the ‘th’ (Tooth, not toof!) and his incessant use of ‘er’ instead of ‘there’ (‘er’ is ‘there’ in Dutch!). He’ll say ‘er is something in my teeth’ and like a reflex I’ll respond: ‘THERE is something in my teeth’. Repeat about 15 times a day, for about a year now. Improvement: 0. But I’m sure it’ll all work out eventually!

In the end, I appreciate the added value of Dutch words in my English pool. It’s basically an extension of my English vocabulary. I notice when I’m back in the States I feel handicapped by my inability to use these words and phrases. It is an expanded vocabulary that is only valid when speaking to other bilinguals, which binds us expats into a strange and quirky club, that I am very thankful to have and be a part of! 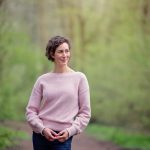 Kathryn Roscoe has been living in Delft since 2007, working on flood risk challenges at the applied research institute Deltares, and (since 2013) figuring out this parenting gig with her tall Dutchman and their nutty 6 year old Lucas.

2 thoughts on “A tale of two tongues: raising a bilingual child”

previousLegal Mom Column: Legal advice always comes with a price
nextSteering the Delft MaMa ship: An interview with the women behind the wheel