How to reduce, reuse and recycle in Delft 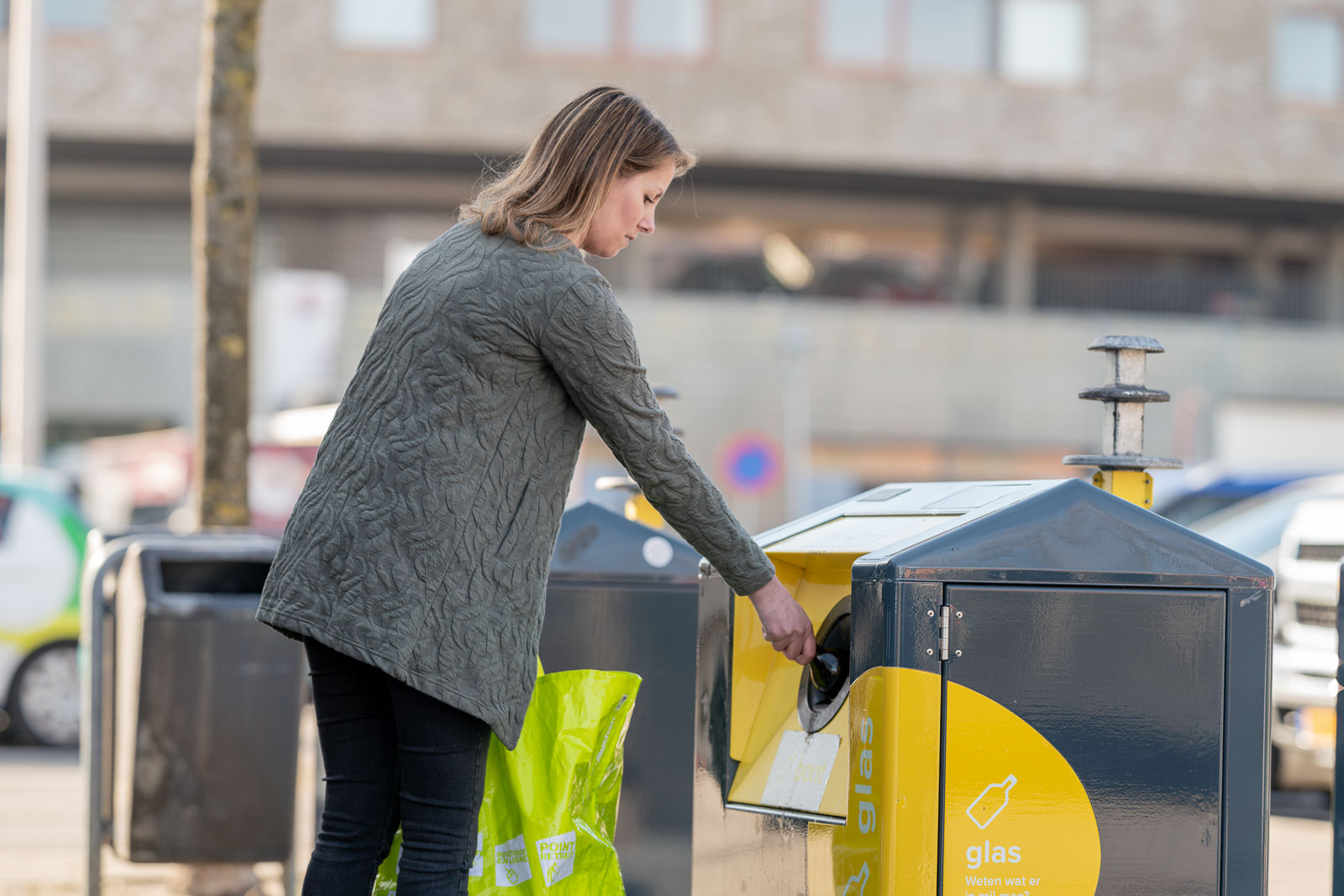 Afval. Rubbish. Garbage. Trash. Whatever you call it, it’s a dirty business and one that everyone is confronted with on a daily basis. But when you start a family, concerns you might have had about the volume of waste you generate may as well go out with the trash.  The decision to go forth and multiply seems to correlate to a mushrooming of “stuff”–much of it necessary, some of it not. Over time, many of these new acquisitions need to be disposed of. Toys, nappies, baby clothes: out they go!

The question is: does it have to be this way? With this post, I want to get to the bottom of recycling in Delft but also gather ideas on how we might reduce the amount of waste we, as parents, generate in the first place; how we might reuse the things we have in our possession and recycle those that we really don’t need any more.  Brain dump your waste-avoidance ideas in the comments section below!

The Netherlands recognises the cost of our throwaway culture – to the environment, to human health and to the public finances. Like all countries in the European Union, it has committed to waste reduction targets but perhaps surprisingly for a country that prides itself for being so zuinig (efficient), the Netherlands is some way off meeting the goal of 100kg of residual waste per person per year. Latest data shows that on average each resident of Delft generates 385kg waste per person, per year. Only 40 percent of that waste is separated for recycling, leaving around 230 kg residual waste which, in the Netherlands, is incinerated. So, what is Delft doing to address the issue? To find out, I spoke to Mirjam van den Berg, Policy Advisor on the Circular Economy, at the Municipality (Gemeente) of Delft.

Waste collection systems, in a nutshell 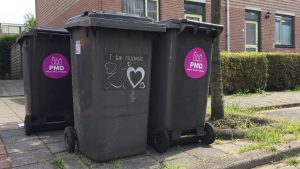 Individual homes can dispose of paper and cardboard, organic compostable (GFT) and residual waste in separate wheelie bins (known as minicontainers or the brand name, Klikos).  Just visit the Avalex website and enter your postcode and house number to find out when to put your bins on the street for collection. 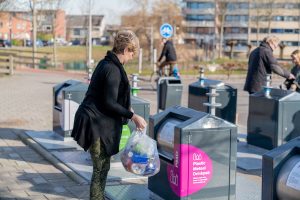 For residents without a garden and apartment blocks, putting out the rubbish involves a short stroll to one of the many communal underground containers which are located across the city. These containers are marked according to waste stream, with residual waste and compostable waste containers provided as standard. Avalex has a useful infographic in English explaining the different waste streams. You can find additional containers for glass, textiles, paper and cardboard strategically placed in your neighborhood. For example, outside supermarkets in residential areas, you will often find the whole gamut of waste containers. You can also find a growing number of large black overground containers for plastic packaging and tetrapaks (known as PMD).

For newcomers to Delft, it can take a bit of research to establish the closest recycling points for different waste streams but again the Avalex website is on hand to help, highlighting the nearest containers on maps of your neighbourhood.

Of course, not all waste fits into a minicontainer or a container on the street. If you have something very bulky to throwaway, the Dutch refer to this as grofafval or grofvuil and then you either need to transport it to Avalex’s waste disposal centre at the bottom of Schieweg (for this, you need an Avalex card which you can obtain here) or you arrange for Avalex to come by and collect it from outside your home, which you can do here.

Some rubbish is simply unsuitable for the regular waste streams listed above. Batteries, for instance, contain heavy metals which can be dangerous to human health and the environment if not disposed of correctly. Instead you should collect old disposable batteries at home in a sealed container which you can then periodically empty into a battery bin. You can usually find one at the entrance to big stores and supermarkets. My local battery bin is IKEA. You can find yours by putting your postcode into this website.

Residual waste is the rubbish that cannot be recycled. In some countries this rubbish goes to landfill sites where it breaks down over hundreds, if not thousands, of years. In the Netherlands, a country short on space, residual waste is incinerated.  Energy is generated from the incineration process but, precious raw materials are being taken out of the loop. To reduce the amount of residual waste produced, two things need to happen: we need to consume less and recycle more. 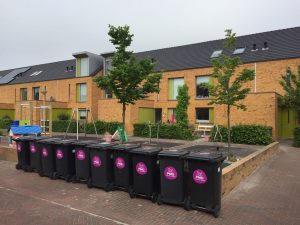 To encourage the latter, the Gemeente is behind a new recycling scheme which was introduced to the Hof van Delft and Harnaschpolder neighbourhoods earlier this year. Residual waste wheelie bins have been replaced with wheelie bins for mixed recycling. Plastic, tins and tetrapaks are all put in one container and sent off to Rotterdam for sorting into seven different waste streams. These are then sent for recycling within Europe. Residual waste is no longer collected from individual houses. Any residual waste now needs to be taken to the underground containers on the streets.

Early signs are that the scheme is going well. Plans are afoot to roll out the scheme in more areas of Delft later this year and into 2020, starting in Tanthof.

Delft’s ability to reach it’s 100 kg target relies not only on the Gemeente’s policy and Avalex’s collection service. It also comes down to individual residents taking responsibility. Separating our rubbish: of course. But more than that, we can play a role in reducing the overall volume of waste.

Conscious choices in what we buy and what we don’t, where we shop and what we ultimately do with unwanted possessions, can make a dent in the mountain of waste. Here are some ideas of how we, as parents can reduce, reuse or recycle:

OPEN, Delft’s library and cultural centre is an inspiring place for children and adults alike and with so many resources to borrow, you can read widely without having to pack your shelves with great tomes.

But you don’t have to limit your loans to books, you can also borrow toys from the SpeelOké toy library on Van Kinschotstraat 21 (read our blog post about them!).

Take money out of the equation and attend a swap shop. DelftMaMa organises regular clothes swaps. If you are a member of the Delft MaMa Facebook page, you can also join the Share and Care page.

Donate to a family in need

Refugee families come to the Netherlands with little in the way of possessions.  Delftse Buur is the organisation which gives these families a helping hand as they set up a new life in Delft. They regularly seek out donations of specific baby equipment such as cots, pushchairs and clothes for newborns. Calls to action are regularly shared (and generously fulfilled) on the Delft MaMa Facebook page.

Buying items second hand prolongs the life of items that might otherwise suffer a premature fate in the rubbish heap. It can also save a ton of money. In Delft there are a number of second hand shops, for example:

These shops are also eager to receive donations.

In the spring and the autumn there are well-organised and well attended second hand clothes sales, with clothes for the coming season displayed on hangers and organised by size and type.

There is also a vibrant second hand market online, the Dutch equivalent is Marktplaats.

Also, don’t forget the biggest second hand market of the year, King’s Day! On 27th April, licensing laws (largely) abandoned, people sell their wares (usually old clobber from the back of their cupboards) on the street. Bargains-a-plenty? Possibly. A reminder on why you should avoid accumulating too much stuff in the first place? Definitely.

The message of David Attenborough’s ‘Blue Planet’ is taking a while to take effect in supermarkets. You can still find cucumbers wrapped in clingfilm and tomatoes served up on black plastic trays.  If you want to limit excessive plastic packaging, you might consider shopping at the Thursday or Saturday markets in Delft. Just remember to bring your own bags. You can also try buying staples from the refill isle in Ecoplaza or ordering a locally-sourced fruit and veg box.

For those of you with babies and toddlers, it is impossible to ignore the environmental impact of nappies. Whether you’re reliant on disposables and clocking the sheer number of nappies you throw away (on average 5 per day and 5,300 nappies before baby is toilet-trained) or questioning the multiple hot washes a week to keep your baby in clean washable nappies, there’s no denying the environmental impact of human waste.

On balance, opting for washable nappies saves some money and decreases your environmental impact. And they don’t have to be the terry towelling nappies relied on in the seventies and eighties. Check out some modern options here. 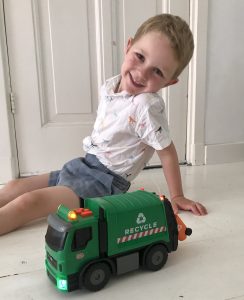 You can involve your kids in separating waste and recycling from an early age. My own children relish an after dinner walk to the bins at the end of our street and love nothing more than posting an empty glass jar in the slot. 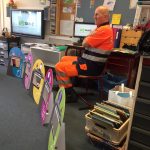 You can also get your school involved: Avalex offers education boxes. And the Papaver, the environmental centre in Delftse Hout, runs a scheme which gives a monetary reward to schools that clean the local streets.

We want to thank the Muncipality (Gemeente) of Delft–in particular Mirjam van den Berg–and Avalex for their contributions to this article.

Julia works as communications manager at TU Delft’s faculty of Industrial Design Engineering as well as running her own communications consultancy, Stories by Design.

5 thoughts on “How to reduce, reuse and recycle in Delft”

previousSo long Lucie, and thanks for all the fish
nextSoft Landing in Delft (SLiDe) Programme