Delft mama of the week: Marie 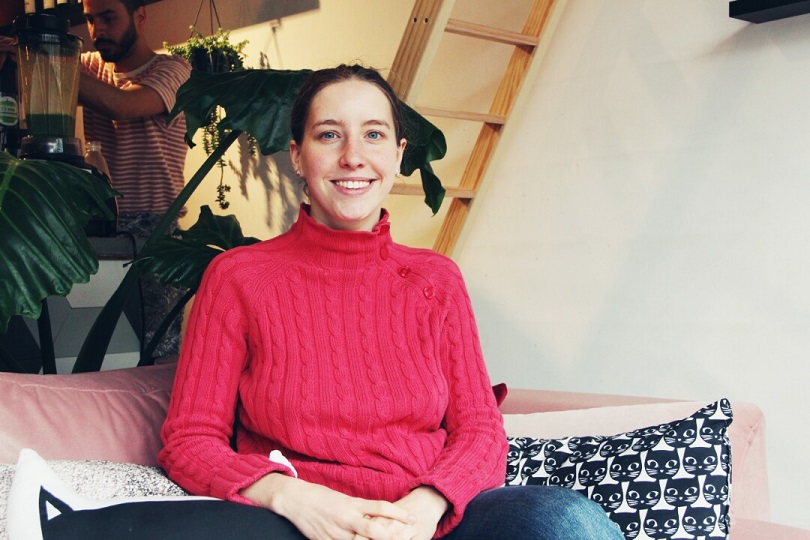 I met Marie for first time last year when she started hosting the Delft MaMa playgroup. She is currently the playgroup coordinator and she’s taking part in several other DMM projects as well.

We sit down together on display on the window of Hummus in Delft and order hot beverages. It’s Saturday and she’s coming straight from mindfulness yoga. It fits the first impression I had of her: a calm mom oozing nothing but serenity, but Marie tells me laughing her yoga classes were a gift from her husband, who hopes she can find it easier to relax a bit. Marie has been called too serious all her life, because of her amazing drive and ambition, so she has made a conscious effort of finding ways to loosen up a bit. To her luck, becoming a mother has been one of the things that has helped her in her quest.

Marie has been calling the Netherlands home for a few years. She used to travel a lot first for her studies: a scholarship took her from her home in the US to Paris when she was only 16, and later during her undergraduate studies Marie spent a semester in Brazil, two summers in Russia and one summer in Paris, where she also completed her master’s degree. Later in life her project based work took her from Scotland to Singapore and everywhere in between. She loves Brazil and says Vietnam is one of her favorite countries. But the love of her life, a Chinese man Junzi, Marie met by coincidence in the Netherlands.

When Marie was expecting their son, now a 1-year-old William, the married couple decided to settle down in Delft. Earlier having spent her time visiting new countries and cities every two to three weeks, Marie was sure she’d go out of her mind in such a small place as Delft. She had good friends in The Hague and in Haarlem, but she was missing a closer safety net. “When I first had William, I wasn’t meeting others very much, but I knew about Delft MaMa. When he was 5-6 months old, I decided to come to the playgroup”, Marie says. Meeting other moms allowed her to create her own social circles in Delft and thanks to this simple plan followed by action she’s much more involved in the community and to her surprise has yet to feel bored in the beautiful medieval town.

Marie speaks several languages fluently (English, French, Portuguese, Russian) and is constantly pushing the envelope with useful things to learn. She is currently taking Dutch lessons and teaching herself Chinese and she’s soon traveling to China with William to stay with her in-laws for a month to get more immersed in the language. She has always been hard-working and extremely driven at school and at work. Before becoming a mother, she describes herself as having been “definitely workaholic”. As one might assume, it has been a big adjustment fitting in the stay-at-home-mom shoes.

Lately Marie has been increasingly thinking about returning to work. The original plan – to return to work when William was three months old – didn’t go through. She realized the plans she had made before the birth of her child weren’t what she wanted and she listened to her heart instead. “Outsiders often think I’m calm, but I feel it’s the opposite! The main struggle now is should I go back to work or should I stay with William,” Marie explains.

The struggle is familiar to if not all, to most mothers. Marie says she knows she shouldn’t compare her own situation to her friends who are working in very prestigious positions around the world, but she can’t help but think about the opportunities she had, the good schools she went to and the professional ambition she to this day has. Now that William is one year old, Marie started to apply to again. She has sent out tons of applications, but hasn’t gotten that much interesting feedback. “It’s always difficult when you’re used to having a job and now I have to think how much I want a certain job and how much I want to stay at home with William. He’ll never be young again, but maybe if I stay out of work too long, I might have more difficulties finding a good job”, Marie says.

She often thinks about why work is so important for people in general. In the more distant past people didn’t define themselves by their work, but now it seems to be one of the first questions people ask each other. Before Marie didn’t mind this question at all, but lately she noticed how defining this question sounds. “It makes you think why do we value work so much as the value of the individual, when it doesn’t represent much at all. Of course it can, but oftentimes it doesn’t,” Marie says and explains how these days a specific job isn’t always what someone chooses to do, as it depends a lot about circumstances one can’t control. “If I’m philosophical enough I’d say would it matter if I’m working or not? What I’m doing is probably more valuable than what a lot of work people do,” she rightfully says at the end of our talk.

1 thought on “Delft mama of the week: Marie”

previousMy six insights on The Netherlands
nextPieces of us