Refugees in Delft: Getting to know our neighbors

Delft, like most cities across the Netherlands, plays its part in settling an increasing number of refugees seeking asylum from dangerous situations.  To learn how the Delft MaMa community might better reach this group of families, I spoke to Delft-based refugees and a volunteer for the refugee-focused charity DelftseBuur to better understand the story of asylum seekers in Delft.

What lay behind your decision to move to Delft? A career move? A study at the technical university? For most internationals, moving to the Netherlands is a calculated choice. But there is another group of internationals for whom this is not the case – refugees. For them, the decision to make the Netherlands their home is driven by something far more fundamental: survival.

I was curious about the stories and experiences of the refugees here in Delft. In this article, I share the stories of two women from different backgrounds who escaped terrible circumstances and found their way to safety in Delft. I also tell the story of a Dutch neighbor, who – through the refugee charity Delftsebuur – found a way to connect with and improve the lives of refugees right here in Delft. 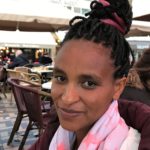 25th August 2015: the day Kewanit Feshaye, together with her two sons and daughter, stepped off a flight from Ethiopia’s capital, Addis Ababa at Schiphol Airport. For Kewanit, this was the culmination of six years of struggle to escape repression, hunger, violence and poverty.

Kewanit never went to school. Her childhood in rural Eritrea ended abruptly when her parents decided that she should marry a man 14 years her senior when she was just 12. Kewanit speaks of the 24-hour celebration in her village and of her personal sadness at having to grow up so rapidly. But in Kewanit’s words: “hij is een aardige man” and despite their premature marriage, it is with her husband that she has fled two countries, had three children (with a fourth on the way) and built a new and more secure life in Delft.

After 16 years in mandatory military service (where abuse is reportedly commonplace), Kewanit’s husband could take no more. In 2009 he fled the military camp and escaped across the border to Ethiopia, finding shelter in a refugee camp. Kewanit followed a year and a half later, together with their baby son.

The refugee camp provided shelter, rations and a respite but by 2014, Kewanit’s husband’s desire for a better life drove him to embark on the long and perilous journey to Europe. The itinerary involved a two-week trek to Sudan, a packed car ride across the Sahara to Libya, a risky boat ride across the Mediterranean and finally a flight to Amsterdam. Once her husband safely made it to the Netherlands, Kewanit got the message to move to the Ethiopian capital, Addis Ababa, in anticipation of being permitted to join him in the Netherlands – which she did in August 2015.

Kewanit and her husband live to tell the tale of this epic journey but not without great cost – both psychologically and financially. The family now owes thousands of dollars for the car, boat, bribes and airplane that brought Kewanit’s husband to the Netherlands – money that they cannot afford to repay at this point.

Money is tight for the couple and their three children – now 13, 6 and 4. After three years of study, focusing on learning Dutch, Kewanit has successfully navigated the inburgering process to gain Dutch citizenship and has recently started working part-time as a cleaner. Unfortunately, her husband, traumatized after brutal treatment at the hands of people smugglers in Libya, has been declared mentally unfit. He is limited to volunteer work as a gardener.

While the cloud of financial worry certainly hangs heavy over Kewanit, she is quick to emphasize that she and her family are otherwise doing well in Delft. Her children have picked up Dutch and are thriving at local schools. Her neighbors in Delft have been particularly helpful, driving her to the hospital when her daughter was sick. The charity for refugees, Delftsebuur has organized bikes for the family. And unlike many internationals who complain of the weather here, Kewanit tells me that she prefers the Dutch climate to the scorching heat back home. 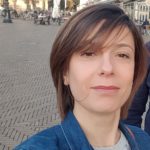 I first met Muteah at HuisNL, a gezellig coffee morning held every Saturday in Delft, for Delftenaars and refugees to meet and chat. She is highly educated and a fluent English speaker but we spoke in Dutch. Muteah has more or less mastered the language – in just two years.

Before the civil war, Muteah enjoyed a good life. She worked as an English teacher in Syria’s third largest city, Homs. But when the city came under siege in 2011 ( a situation which was to last for three years) life became too dangerous. Together with her husband and her then six-month-year-old daughter, Muteah fled to Lebanon where her sister-in-law lived. A second daughter was born, but work was difficult to come by, so in 2014, they moved on to Turkey. There, life proved even more difficult. It was the impetus for her husband to travel west, taking a boat to Greece and asylum in Europe. Muteah, her daughters and parents-in-law were permitted to join her husband in June 2016.

Muteah talks about the initial struggle of living on state benefits. Luckily her husband is well educated and recently found work as a 3D designer for a company in Leiden which has brought stability and hope. Muteah has been able to focus on studying Dutch in pursuit of citizenship, as well as caring for her beautiful daughters.

As is the case for many internationals, the Dutch healthcare system required some getting used to. In Muteah’s home country, it’s normal to go straight to a specialist, so the process of going to the huisarts to get a referral (or not, as the case may be), felt somewhat baffling. But overall, Dutch culture has been relatively easy to get used to. People are friendly and welcoming, and the fact that she speaks English helps her when her Dutch fails.

Gijsje Jacobs is a volunteer for Delftsebuur, a charity which coordinates support for the refugee community in Delft. She coordinates the collection and distribution of baby equipment and clothing for refugee families, and she also works as a buddy for a refugee family.

One of her buddies was a Syrian lady who was pregnant with her first child at the same time as Gijsje was pregnant with her third. Gijsje was able to offer reassurance as the lady navigated the strange experience of a first pregnancy in a foreign country. Over a year on, Gijsje and the lady still frequently connect with their babies for playdates.

For Gijsje, working with Delftsebuur has been an enriching experience. It’s given her deeper insight into foreign cultures, war, and life as a refugee in Delft. Despite a busy job, and three young children, Gijsje finds her volunteer work “refreshing. My own stress is not important when I hear the stories of these people.”

From Gijsje’s viewpoint, life is often more difficult for the women in refugee families. Integration is a bit easier for men who go out to study or work and for children who learn Dutch at school within a matter of months. But women tend to stay at home once they have children, so life can be very lonely.

When I ask how Delft MaMa can better reach these women, Gijsje mentions the language barrier. English is the lingua franca for many internationals, and therefore the working language of Delft Mama, but only a few refugees can communicate in English. Dutch is far more important for them: it’s the route to citizenship and a safer and secure future.

Want to get involved?

Refugees have very different stories than most of us at Delft Mama, but their confusion navigating life in the Netherlands is pretty familiar to most of us. For Delft Mamas (or Papas) who want to support the integration of refugee families, and can communicate in Dutch, DelftseBuur provides a great place to start. There is always a need for buddies, who donate about 1-2 hours per week for a minimum of 3 months to do things like: have a coffee, go out to eat, check out the city, help make phone calls, practice Dutch, and talk about the Dutch way of doing things. You can request information at info@DelftseBuur.nl.

3 thoughts on “Refugees in Delft: Getting to know our neighbors”

previousHalloween: From spooky origins to family fun
nextMaya Levi: Determined not to let life be defined by MS