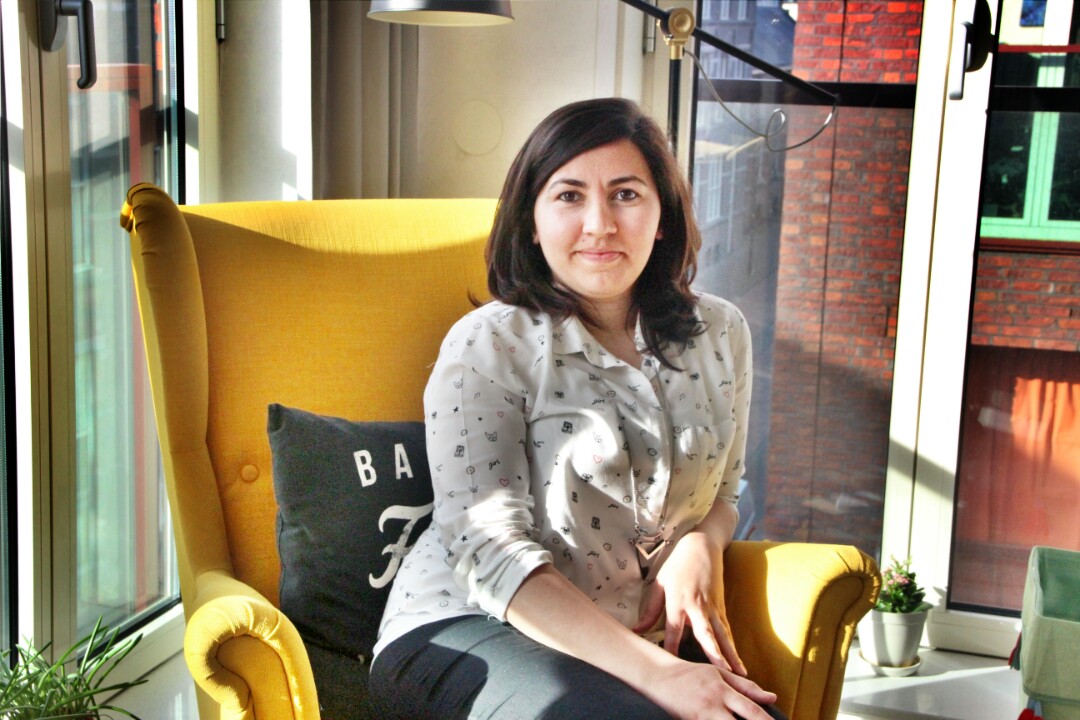 Sine invites me to her house for the interview. When we step in the elevator she tells me many of her neighbours are older people. She loves it, as they are very curious about her son, Arda (4). Just like herself, her husband Faruk also originates from Turkey. When biological grandparents are a plane ride away, living among the elderly is giving their family some invaluable contacts that otherwise might be harder to come by.

It’s the first time I visit Sine in her home. The Sun is shining outside and laying rays on the two yellow armchairs in front of their living room windows. The style of the home is impeccable and it feels welcoming. Sine tells me she could’ve chosen her career path differently and pursue one of her dreams of becoming a designer. She sure has the eye and the taste level for it. However, Sine chose another one of her passions and decided to study English language and literature at the University of Gaziantep in southern Turkey. That is also where she met Faruk.

When I listen to her stories, she comes across like a bit of a nomad. Both of her parents are from Circassian descent, both of whom are born in Turkey. Circassia was a sovereign nation until the mid-19th century on the shore of the Black Sea with its own rich language and cultural heritage. Her name, Sine, is a typical Circassian name, so although born and raised in Turkey, her parents valued their heritage and Sine was already happily living between two worlds.

Her first experience outside Turkey by herself was her three-month trip to Alaska through a work and travel program and afterwards she knew she couldn’t settle in Turkey for good. During their University years Faruk applied U.S. Green Card lottery and asked her to try as well. She calls her last year at the University her “lucky year”, because not only was Sine granted a chance to study in Denmark, but she also won a Green Card. Instead of spending an entire year in Denmark, she spent three months there and then moved to New York with her husband.

The nearly seven years they spent in New York were great but tough. When Arda was born, the grandparents from both sides would fly from Turkey and babysit him one after another. “In New York we had fun, but we did work a lot. When I was studying in Turkey, I was reading about American history and about the American dream, but in New York life was different. You don’t have much time to spend with your family,” Sine points out. When Arda was born, Faruk didn’t get to see him almost at all. Luckily Sine’s work at a non-profit organization was more flexible, but in the long run something needed to change. Out of all places, the family relocated to Oklahoma.

The first three months in Oklahoma were great, but soon enough Sine realized she misses the big international community around her, which she had gotten used to while working in Manhattan. Some years in, Sine realized she wasn’t very happy in Oklahoma. The window of the opportunity to move to another country was closing in, because Arda was getting older and soon they would have to think about settling down for a longer period.

In 2014 the family visited Maastricht during their holiday in Europe. It was then the spark for the Netherlands was ignited. In 2016 Sine’s husband arrived in Delft for a job interview and in September they moved to this picturesque town. It wasn’t a smooth transition, especially with the housing and picking a school, but one of the aspects that made the move easier was a great online community happy and quick to answer Sine’s questions. “I found Delft MaMa when I was searching for how to do something in Delft. Whenever I had questions in my mind I asked them. I joined the group before I came here and they helped me a lot about many questions, and got me socializing quickly”, Sine says. Sine also took part in a DMM organized soft-landing in Delft, or SLiDe program for short, and after seven months of experience on living in Delft she felt confident enough to mentor another Turkish newcomer.

Because of her keen eye, Sine has been volunteering for the DMM even further to help with the 10-year anniversary preparations. “I like doing things like decorating and currently I have enough time to help with these kinds of things. A lot of other organizations in the Netherlands require a lot of Dutch. Delft MaMa is more international”, our mom of the week points out.

People often ask Sine if they moved to the Netherlands, because statistically some of the happiest kids in the world live there, but she tells me it wasn’t the reason. “To me it seems the kids are happy, because from my point of view it’s such a luxurious thing to spend breakfast time with family in the morning, then bring the kids to school that is at a walking or cycling distance, have time to stay at school for a moment, go to work and be back home for dinner.”

In the end, when I ask about Sine’s cultural identity, she says to me she feels more Circassian than Turkish, more American than Turkish, but when she must say where home is, it’s Turkey. “Maybe in 10 years I’ll say I’m more Dutch, who knows. To me, it’s having the best of both worlds. I want my son to grow up in an environment with people from different cultures. We had that in New York and I loved that aspect so much. Delft is no New York, but it has a big international community. I feel so lucky,” Sine says happily.

previousPieces of us
nextWhat’s your time worth?