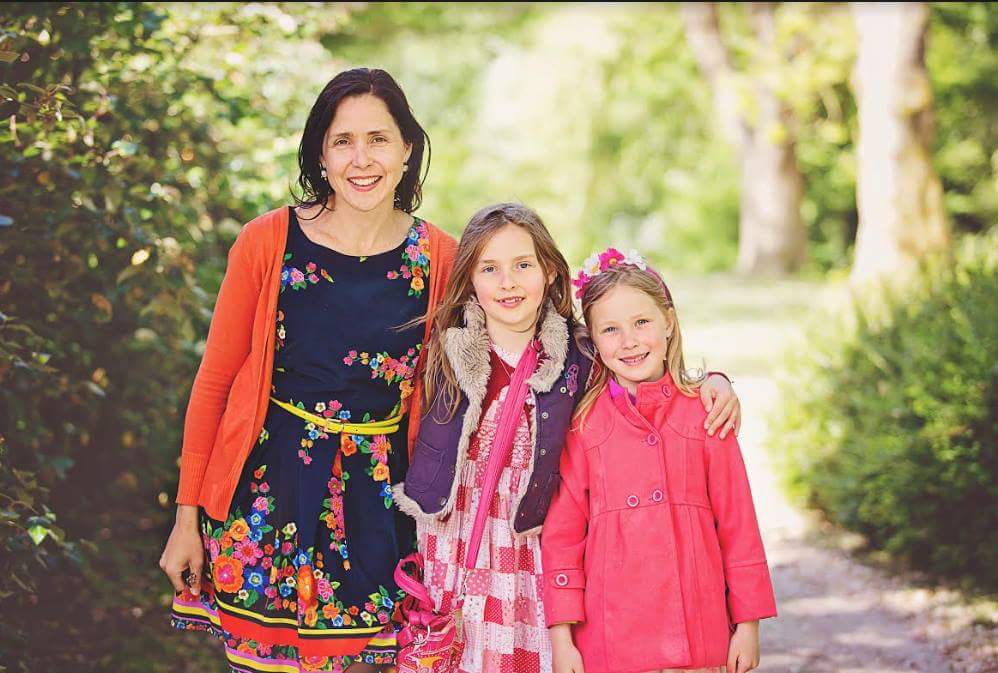 It was a chilly Tuesday morning that was going to turn into a warm afternoon. I met our mom of the week, Renée, at café Kek in the center of Delft right after she had dropped her daughters Sophia (9) and Isabella (7) off to school. She was cycling from Ypenburg, which by land belongs to The Hague, but the phone numbers were the familiar 015 of Delft. If she could have, Renée would have bought a house that was built half in Delft and half in The Hague. Ypenburg was the closest compromise. Luckily for her, the day was going to be a warm day (warm for Dutch September). Renée wasn’t quite ready to give up her feeling of summer just yet, after having spent the entire holiday in Australia with her girls.

Renée met her Dutch husband while he was backpacking across Australia in 2001. Soon enough they were in love and she found herself living in Europe. She was there with the first wave of Delft MaMa nine years ago, she sat on the DMM board for a while, did the first newsletters for Delft MaMa as well, but eventually Renée missed Australia’s warmth and familiarity and in 2007 the family with a five-month-old packed up their belongings and moved all across the globe. The family returned to Delft in 2012 after a long deliberation. “By then I had two children and I had to make a choice for the family, not for myself. That was the hardest thing I’ve ever done. I still believe it was the right choice, because it was the right choice for my family.”

By heart Renée has always been a true world citizen. As a child she wrote to penpals across the globe and as an adult worked in the traveling industry before coming to Europe. These days she is surrounded by global citizens in her private life and at work and it’s just he way she likes it. Renée teaches social media, eBusiness and marketing at The Hague University of Applied Sciences. “I came in as a freelancer to teach eBusiness, but now I’m a staff member. To stay a staff member, I need a masters degree, so I’m now half through my masters in international communication management. I’ve got one more year to go”, Renée states.

She gets excited when we start to talk about education. When Renée was living in the Netherlands the first time around, she was trying to find work and had a lot of trouble with it. But instead of letting it slow her down, Renée saw what she needed to do to be able to live the life she wanted, and so she started her bachelors. “I came to the Netherlands without a degree. Here without an academic qualification you kind of got to take a step back. I studied through both of my pregnancies and I got a degree from open university of Australia.” Next year Renée is due to graduate with her masters from The Hague University of Applied Sciences.

When the family moved back five years ago, she hadn’t heard about the strict rules of compulsory education (leerplicht) in the Netherlands. In many countries parents can pull their kids out of the school just by notifying the teacher and coming to an agreement, but the Netherlands is extreme about this. When the kids were small, it was easier for Renée to take the girls to Australia during Christmas time, but as they got older and she discovered leerplicht, she literally cried. “This is one of the hardest things about living here”, Renée truthfully says and explains how the Netherlands likes to show to the rest of the world that they are an international country that is open-minded, yet it is so strict about visiting friends and family in other countries, which is a big part of a child’s education. “When children are doing well at school, two weeks out at Christmas time isn’t going to make an affect on their long-term academic success. The Netherlands needs to look at better understanding the needs of multicultural families. The parents should also have an opportunity to contribute to the child’s education, and traveling and culture is just as – if not more important – than the things they learn at school. I thought about starting a social media campaign to make the ambtenaars to hear our side of the stories and to have academic research to back it up.”

Listening to Renée talk gives me glimpses of future. She seems to be onto something at every turn of the conversation. Right now she teaches in The Hague, but far into the future Renée dreams of teaching one semester in the Netherlands and another in Australia. But when that happens, teaching is probably not going to be the same as it is now. Renée drops Blended learning on the table. It’s a combination of face-to-face interaction and online learning, but it’s still developing. “I see massive potential in my students every day. There’s millions of hours of video on the internet available right now, but it’s not as engaging as being face-to-face.” Even at this point the students in her classroom are from all corners of the world. Renée teaches in English, but points out the English that she uses in her work environment is international English, not native English. She makes sure her girls keep on using their English, too, because it’s the language that opens up the world to them and using multiple languages teaches the brain to think differently. Renée used to organize something called Kids English Club when she just moved back in the Netherlands, but recently hasn’t found the time to fit it in her busy schedule. “I have a Facebook group, a website and a blog and I’d like people to contribute resources helping children learn English. Something the parents can do at home, such as apps, websites, recommended books, programs, YouTube videos. If anyone’s interested to assist in this project, I have the structure there, just not a lot of time.”

Time and the lack of it pops on the table every once in a while. Renée has learned to organize her time with a work-balance model she came up years ago. If things are getting too busy, she’ll set up a priority list on the wall. Her family is always number one, her career a good second and the rest follows after. “I read a very cool thing about Leonardo da Vinci that he did all these incredible things but still felt he didn’t get everything done. I feel like that a lot. There’s so much that I want to do”, Renée says.

She sometimes wonders if she chooses to do the right things, but has always lived her life with the attitude that failing is acceptable. Renée often does things that she thinks she might fail at, but somehow manages. “I’m doing my masters, I got an awesome job, even at parenthood you kind of feel like you’re gonna fail every day, but somehow you realise you are still raising amazing kids.” It’s not the fear of failing that stops Renée doing things, it’s the lack of time. She regularly uses the help of a cleaner, after school care and a babysitter. Before they seemed over the top luxury, but now that Renée has filled that time, she can’t do without them. She tells me the first few years after moving back to the Netherlands, she suffered from depression and anxiety and this forced her to stop. “You physically, mentally and emotionally just can’t go on. That’s when I learned to let go. The world was still operating and the kids were pretty good at doing things for themselves. Ask for help! Those with very young children should know it does get easier! When the children are little, they really need you, but once they are off at school, you’ll have gaps of time in the day. I want to make clear that it’s not always awesome. It’s important to be honest about that, because otherwise people look at other people’s lives and think everyone else has it so good. I’m struggling at the moment on getting back from the holiday mode to work mode. I miss my family in Australia, but the sunshine here in the Netherlands at the moment helps. But in the long winters I have trouble.  Overall though, I do think that life here in the Netherlands is great, and offers our family wonderful opportunities.”

“I particularly love being part of the warm, friendly, close international communities in Delft and The Hague. I’ve made lifelong friends via Delft MaMa. I even have some real Dutch friends, too”, she says. Lunchcafé Kek is filling up. People are chatting around the tables. Renée has dual Dutch Australian nationality, but she says she’ll never be as much Dutch as she is Australian. “The Dutch are awesome though. The Netherlands is one of the best places to be for a global citizen. If you ask these people in the café, we’d probably would have at least ten nationalities”, Renée says. Faithful to her busy schedule, she has to be somewhere else soon. Not so surprisingly she’s off to meet with another global citizen.

To contact or get to know Renée’s projects more, visit her website or her Dutch Australian blog.