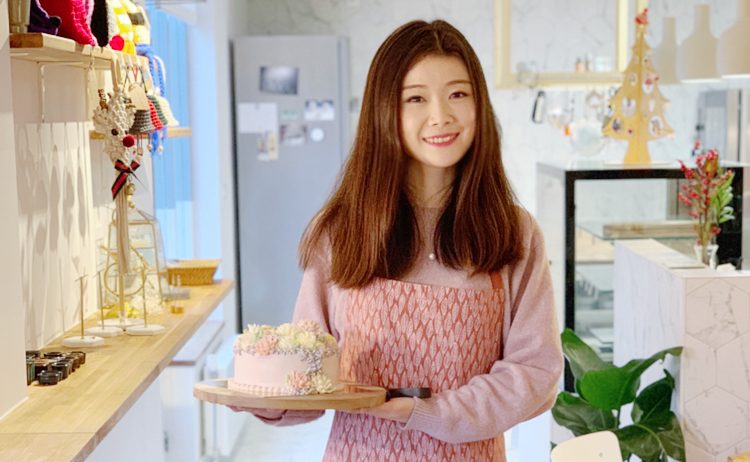 Join us for the second post in our Delftian Entrepreneurs series (read the first post here) as Delft MaMa Julia Candy introduces us to Jie Li, aka the Cake Researcher. Read about this phenom of a woman who balances an academic career, motherhood, and a bustling side hustle.

If there is one thing that Delft is not short on, it’s cafés. Walk along the canals of the city centre and you’ll soon notice the abundance of places to enjoy your morning coffee or afternoon tea. Child-friendly cafés, like Mint, Bakker Suikerbuik and Jans; organic cafés, like Kek; traditional Dutch ‘brown cafés’, like Kobus Kuch. There’s even a cat café.  Whatever your cup of tea, there is a gezellig café willing to cater to your tastes.

This café culture may be wonderful for the likes of you and I, but it must be daunting for anyone contemplating setting up a new café. Meet: Jie Li! Undeterred by the saturated market, this brave soul burst onto the café scene at the end of 2018, with the intriguingly named Cake Researcher.  This bijoux cake shop has a reputation that goes before it. With an Instagram account that is so delicious-looking that it makes you want to gobble it up and rumours of cakes selling out by 2:30 pm every Saturday, this entrepreneurial Chinese mama was somebody I was intrigued to meet.

Jie Li is someone who likes to have her cake and eat it. Not content with a blossoming full-time academic career at the Centrum Wiskunde & Informatics (CWI), Jie is obsessed with researching, testing and refining cake recipes to create that the most eye-catching cakes with the most delicious flavours and she’s decided to turn her hobby into a business. 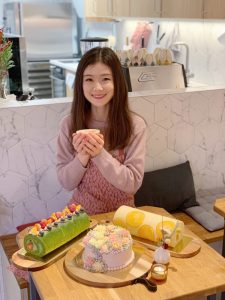 According to Jie, “it started with cheesecake”.  In 2006, when Jie and her now husband, Haozheng, visited Hong Kong, they decided to treat themselves to a luxury high tea. One taste of the cheesecake was all it took to get Jie’s taste buds tingling. But at nearly four euros a slice, it was a high price to pay for someone on a student budget.

After the trip to Hong Kong, Jie’s brain started ticking. She read up on recipes, wondering how she might replicate the delicious dessert at a lower cost. Limited by the ingredients she could find in China, it wasn’t a case of simply following a good recipe, but more a process of trial and error. Jie would try replacing some of the cream with yoghurt, cutting a little of the sugar and playing around with the flavours until she produced something that she could call her own. It was the beginning of hobby-cum-career which is best described as all-consuming.

Baked in at birth

Jie’s interest in baking is not totally surprising. She hails from Chengdu—not only the capital of Sichuan Province—but arguably, the culinary capital of China. Her father owned two restaurants in neighbouring Tibet and by the age of 10, Jie had her first part-time job in a restaurant kitchen. Her home was located right next door to her school, and she recalled how she would “return home at lunchtime and cook my own lunch of rice and stir-fried vegetables.” 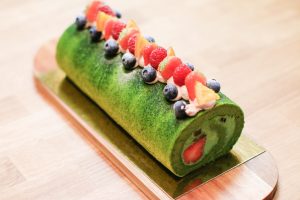 The culinary skills Jie learnt as a child have stood her in good stead as Jie has refined and expanded her repertoire of cakes, with an emphasis on flavour and quality ingredients—especially Asian ingredients such as matcha (Japanese green tea).

On a recent trip home, Jie was introduced to Xianxin Zeng, one of China’s top chefs, who was surprised to learn that Jie hadn’t received formal training at a patisserie school.

The fact of the matter is that Jie is first and foremost a talented designer who came to Delft a decade ago to complete her Masters, soon followed by her husband, Haozheng, also a designer. Jie’s Masters course turned into a PhD and her PhD in turn, became a postdoctoral position. Nowadays, Jie works Monday-Friday in the Distributed & Interactive Systems Group of CWI, where she carries out research on immersive media—a job that she says, “challenges my brain”.

In contrast to her academic research, the physical process of testing out new recipes as the Cake Researcher is something that Jie finds incredibly relaxing and she describes experiencing “flow”. 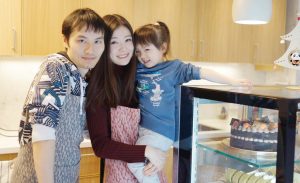 Jie with Haozheng and Leylan

By combining these two very different lines of work, Jie is certainly making the very best of her talents but admits that with her three year old daughter, Leylan—a vital factor in the equation—this is a very much a balancing act. Jie mentions the support she enjoys from the community of Chinese parents in Delft, as well as from her own mum and her mother-in-law, who regularly take it in turns to come over from China to lend a helping hand. But even with the magic of grandma, I’m curious as to just how Jie works two (highly demanding) jobs.

Here’s the thing. While there is no shortage of ambition when it comes to the cakes, Jie has consciously chosen to keep the Cake Researcher small, but special.

When it comes to the café itself, Jie and Haozheng opted for a space slightly off the beaten track and decidedly diminutive in nature.  The premises are located on Kruisstraat, a stone’s throw from Oostpoort and Bastiaansplein, but away from the tourist hotspots of the Beestenmaarkt and the Grote Maarkt. The clever interior design of Haozheng, transformed the building—formerly an unloved takeaway restaurant—into a fresh space which will sit 16 comfortably or 19 at a squeeze.

Somewhat unusually, the Cake Researcher has very limited hours. It is open exclusively on Saturdays from 11 am till 6 pm—a conscious choice on behalf of Jie, who recognised that she would not enjoy baking on an industrial scale. For Jie, the café is a vehicle for her to continue her experiments in creative cake baking, rather than feeding the five thousand in the pursuit of big profits.

This is not to say that the Cake Researcher is a commercial flop. Far from it! Since its opening in December, all of Jie’s cakes—baked fresh on Friday evenings—have sold out long before the 6 pm closure time. In fact, usually by 2:30 pm!  Be warned: if you want to taste Jie’s signature carrot cake or matcha rolls, you need to get there early.

At the Cake Researcher you can enjoy a taste of Asia. Green tea, mango and black sesame are just some of the flavours you can expect to find on the menu. While some of the more exotic ingredients are sourced abroad, Jie and Haozheng have taken care to collaborate with local businesses wherever possible. For instance, their eggs and milk come from the dairy by the Oude Kerk, Boerderijzuivel & meer; and the cafe’s beautiful crockery has all been hand-made by Simone Haak, owner of the Terra Gallery. And the machines responsible for pumping out the delicious coffees were bought on the expert of advice of Delft’s very own Miss Morrison.

Jie and Haozheng talk about how their Dutch friends and neighbours have helped them through the teething problems of setting up their business—from helping negotiate a good price on their premises to mopping up the water which flooded the Cake Researcher during heavy rains at the beginning of March. The stresses and strains of setting up a new business have certainly been sweetened by the kindness of their community. 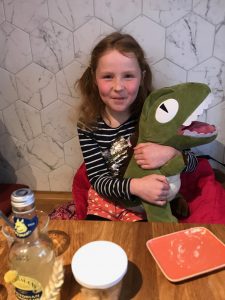 We hurry towards the Cake Researcher, arriving at around 11:10 am. The café is already three-quarters full. We check out today’s selection of cakes displayed in the chiller and settle down at the one remaining table, happy to find seats, next to a cuddly dinosaur. 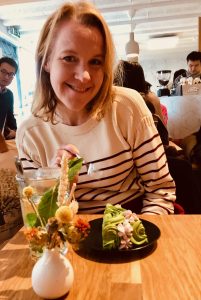 Marianne is wowed by the eye candy of cakes and excited by the buzzing atmosphere. She enthuses about the bright green matcha cake but, a little nervous to order something she’s never tasted before, she opts for the safe-bet of mango roll. I decide to go green: matcha all the way!

Both cakes are fresh, full of flavour and not overly sweet. In a word: delicious. Marianne enthuses: “Wow! This is so yummy. It’s much nicer the fondant icing you have on children’s birthday cakes.” This, coming from a girl who has inherited her mummy’s sweet tooth, is a genuine complement.

We leave enchanted by the Cake Researcher’s experiments and swear to come back with more willing guinea pigs very soon.

Photos are thanks to Julia Candy and to the Cake Researcher’s instagram.

I don’t know about you, but I finished reading this piece ready for a slice of one of Jie’s cakes. If you go to her café, let us know what you think!

Coming up next month, our own Legal Mom will be back with another post (see her first post here). If you haven’t contacted her with your questions (subject: Legal Mom), it’s not too late!

See you next time for the results of a special community poll by our own Kathryn Roscoe.

1 thought on “Delftian Entrepreneur: Jie Li, aka the Cake Researcher”

previousBlasts from the past: revisiting the DMM blog’s gems
nextLearning Dutch in Delft: 2019 update