Delft Mama of the week: Fenia 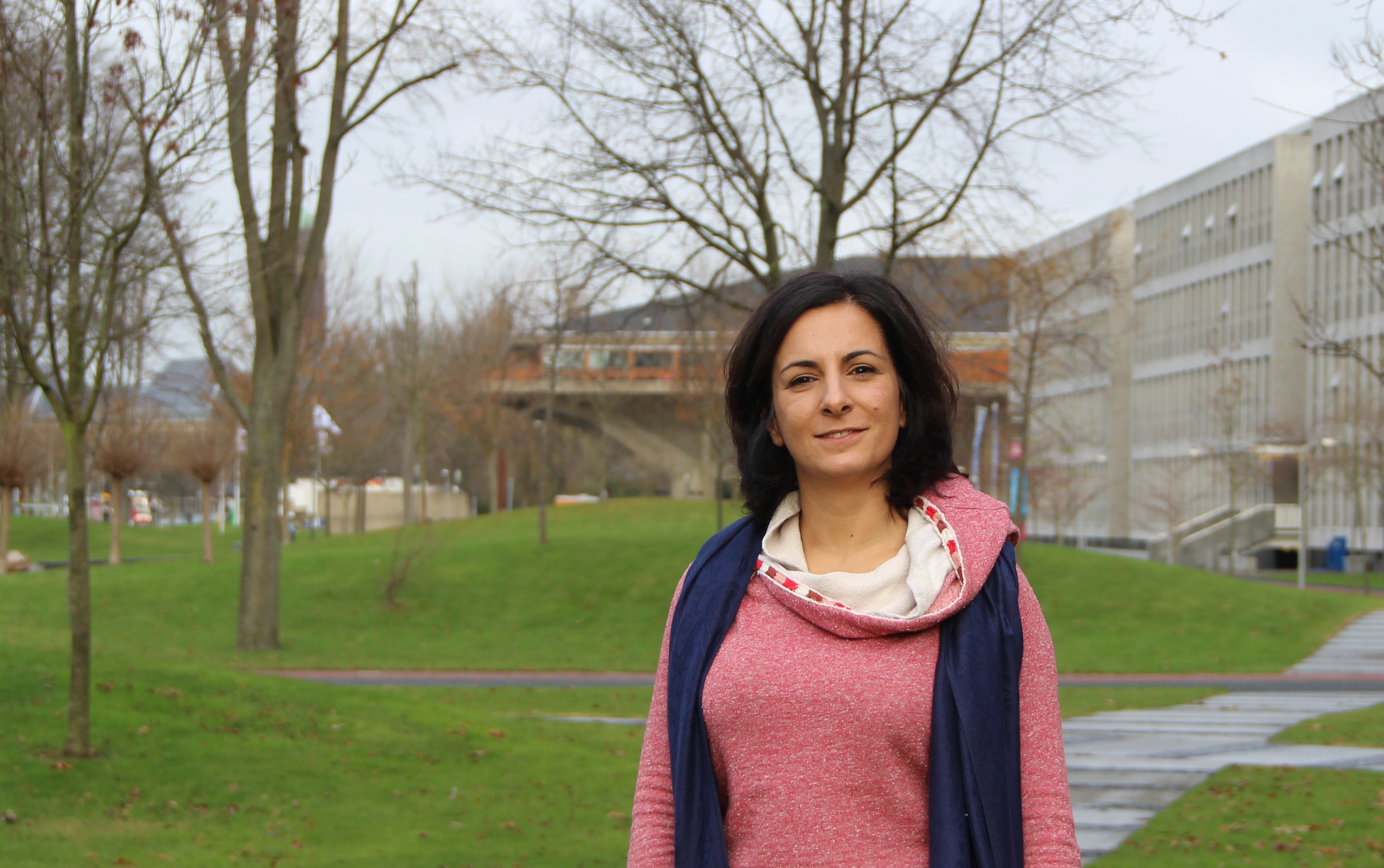 It’s a sunny Friday morning when I park my bike in front of the tall, red EWI building at the TU Delft. She greets me by the entrance with a big smile on her face and an energetic spring in her step. She has been working as a post-doctoral software engineering researcher for about three years at the TU Delft. She knows an incredible list of languages: Greek, English, some Dutch, Java, C, C#, Scala, VB.net, PHP, ASP, Javascript and SQL. After this alphabetic exercise it doesn’t come as a surprise that she’s also one of the webmasters of Delft MaMa. And today she is our mom of the week, Fenia.

Fenia and her husband Georgios moved to the Netherlands five years ago for his studies. At the time Fenia was expecting the couple’s daughter, Elli (4). Initially they intended to stay for a year and a half, but they found themselves fitting in comfortably. Once Georgios got a permanent job and Fenia started to work, too, they realized they wanted to stay in Delft. Fenia loves her work at the university, but it wasn’t the only thing convincing them to stay. “I like the fact that for children here the conditions, such as the structure of education, are great. We have a good social circuit here through Delft MaMa mostly”, Fenia explains. Life seems more relaxed here for them.

Before Elli was one year old, Fenia was a stay-at-home mom. Time was passing slowly, so they would fill their days up with not only DMM playgroups three times a week, but also visiting other playgroups in the area. They would go swimming and frequently go to the DOK library. “I was really thankful for the opportunities to go out of the house. It’s a bit lonely just with a baby in a new environment”, Fenia puts in words the feelings many expat first time moms go through. At home when breastfeeding her daughter, faithful to her productive spirit and a hunger to learn, Fenia would follow online courses, such as “Buddhism and Modern Psychology”, “Nutrition and Disease prevention” and “Science of Happiness”. “There are free courses, so why not do it!” Fenia says and makes an excellent point.

Fenia is a natural problem solver. That and getting caught up creating something is in fact what fascinates her about programming. Almost as long as she remembers, she has always been programming. She studied computer science in Greece, did her masters in Manchester and her PhD about network security back in Greece. Now she’s a part of a research team at the university. Fenia’s supervisor told her they want to do an experiment at school about how children can write good quality code. “We used to do research about quality of spreadsheets. Now we started doing research about computer education, so basically about how children write programs”, Fenia says and continues explaining that the quality of the code is important, because aspects of bad quality code really affect how well the children understand programs. Fenia tells me that in some regards it’s better children are a bit older when they learn programming. It can happen from eight years on, but the team Fenia is a part of has seen how 10-11-year-old children do not perform as well in some computational concepts in comparison to their 12-13-year-old peers. The difference in performance is significant, so presumably some aspects might be better left for certain age. This said, the research is still ongoing.

Right now Fenia and her team are running an experiment to see if children can learn to program better on a machine or offline. “It’s a totally different atmosphere in the classroom. We have observed that when we try to evoke children to create a program and they have the machine in front of them, they are very often distracted: there is noise in the classroom, lots of interactions, which is not a bad thing, as they seem to enjoy it. However, we want to see the effects on how much they learn and in the end if it’s better for them or not. It might be; after all children like being social”, Fenia explains.

She obviously gets a lot out of working within a research project. She talks fast, and her brain seems to be computing even faster. But despite her lively appearance, Fenia used to struggle with stage fright so much that she disliked going to conferences to present something. Then something changed. “When coming here [TU Delft], there were lots of discussions about how to improve your presenting skills. I took courses and presented to the research group many times over. I would get lots of feedback before going to a conference”, she tells me and says her first presentation was nonetheless very hard. The second one was already a bit easier and last month for the first time ever, Fenia found herself presenting in a conference in front of more than a hundred people. The best part of it was that to her surprise she was really enjoying it.

A new chapter has just begun in Fenia’s household. Elli turned four years just last week and started school. Thursdays have so far been Fenia’s free days with her daughter, a mamadag, and on their last mamadag they had an unplanned free-to-do-whatever-day. They went shopping, prepared treats for her friends at daycare and baked a (fantastic looking*) cake. Fenia finds it important to do at least one actual thing with her daughter every day. “Lately, after seeing a movie called “Room“, I realized we don’t necessarily always do so many things with our children. It’s very sad to think we don’t have attention to our kids, and because it’s sometimes hard to remember, I try to put some hours of the day just to focus on her and nothing else”, Fenia says. At home, she has filled up a jar with small pieces of paper that all have one thing written in them. Each day they take one out and do what it says. Some of the tasks are simple, such as going to buy a piece of fruit together that they never tried, and then preparing and eating it together; going for an evening stroll in the city; watching a film together; having a dance day or a yes day. “Yesterday we mixed up all the drawers and it was so much fun when my husband came back and couldn’t find anything”, Fenia laughs. For December, Fenia is filling up the jar with acts of kindness to others that she got inspired online.

I’ve come to two conclusions about Fenia during the interview:
1) She is admirably energetic and quick-witted,
2) Her heart is most likely solid gold.
During the 40-minute interview I have enjoyed immensely listening and getting to know her. It’s easy to agree that she is one of those people who sees obstacles as puzzles to solve. She’s creating, diving in, giving her all and has a wondrous curiosity about the world around her. For these, and for many more reasons, Fenia makes Delft MaMa a better community.

The next Delft Mama of the week will be published on Friday 23rd of December.