Bicycles and traffic for the newly arrived 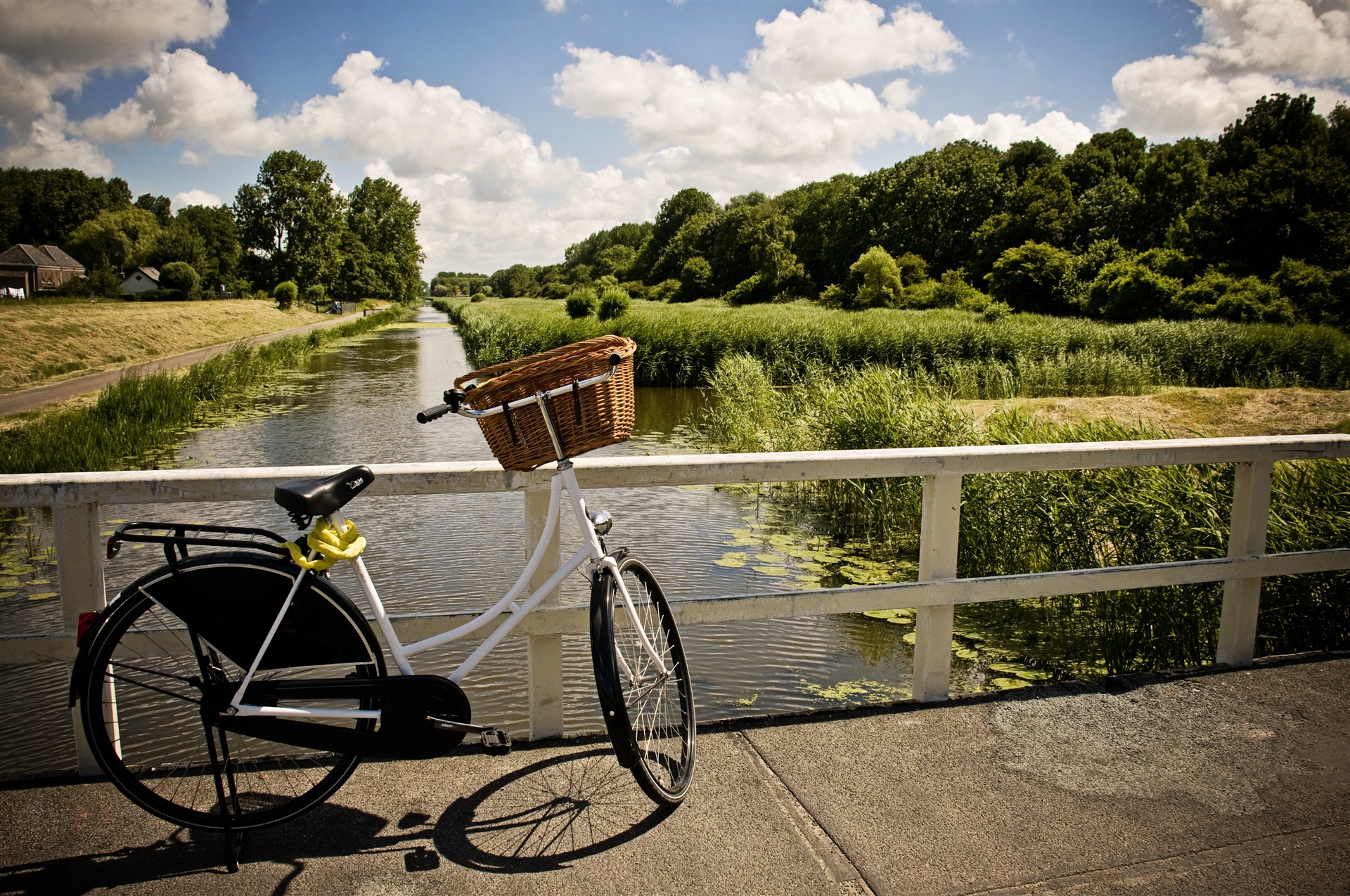 It’s the time of the year a lot of people working in sync with the academic school year have just found themselves relocated in the Netherlands. A new wave of people arrives every summer and face similar challenges every autumn after the sparkling, upsetting, amazing period of settling in. One of the things that fascinates and often intimidates most newbies in the Netherlands is the bicycle culture and the unique traffic in general.

I have met a number of newly arrived parents in the last couple of months. They have been equally curious about many things, but especially about things to do with traffic. Can you keep your foreign driver’s license and if so, for how long? How different is it cycling between the cars than on a sidewalk? Where do you get your bike and more importantly how do you lock and store it? What are the general traffic rules? 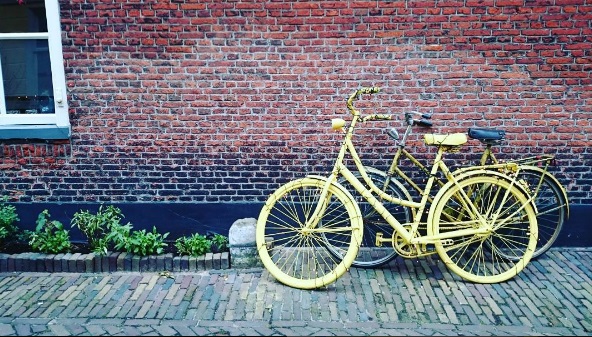 You can always decorate your bike to make it easier to recognize when you need to spot it in a sea of bicycles.

When one of the newbies were asking these things, I blurted out the truth of my own experiences and from the expression on her face I saw how frightening it may have sounded. I didn’t mean to scare her, so here is my attempt to fix it. For the general traffic rules I advise anyone to watch some YouTube videos [1]. This, and having my husband sit next to me while driving the car, have taught me the basic differences of traffic rules between the country where I come from and the Netherlands. As an EU citizen with an existing permit I never had to take a single driving lesson in the Netherlands, but filling out some paperwork and paying granted me a Dutch license. However, I think anyone who isn’t familiar with the Dutch traffic rules will benefit from an extra lesson especially if they want to get behind the wheel quickly, but find the idea intimidating.

For me it took years to build up the courage to drive the car in the Netherlands. Possibly because we didn’t own a car back in the day and the idea of driving with someone else’s car in a traffic I was unsure of was not a great combination. When the right chance presented itself, my fears gradually dissipated too. 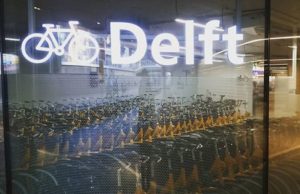 The bicycle rental and repair shop at the Delft station is open 24/7.

I never had a problem with bicycling, but I used to doubt myself riding a bike with my children. I started by cycling on a three-wheeler bakfiets with my kids, which was easy once I got the hang of the bike. But then one day I was supposed to pick up my daughter from school with my regular bike, take her to the swimming lesson and come home with her. It was Friday and the end of a theme at school, so on top of her school bag and swimming bag, she also had a bag of works she had done at school, including a sphere she had made that was nearly as tall as she was. She was on her step scooter, so I wasn’t supposed to have her on my bike. However, after the swimming when we already were on our way home, she all of a sudden said she really needed to go to the toilet. It was raining and it would take us at least 15 minutes to reach home in her scooting speed. I told her to hop on my bike. I gathered all the stuff and started cycling. In retrospect this was nothing special, but for me it was the first time I had a child on my bike (and a step scooter, a sphere and three bags). I smiled like a tiny little dork while peddling all the way home. I suddenly felt quite Dutch. This one step of courage was the pivotal point for me and after mastering this it never seemed like a big deal to have her or one of her younger siblings in the child seat on my bike.

Now that I use both of my bikes daily and the car every now and again, I have come to realize the best way to understand traffic, after understanding the traffic rules of course, is to experience both sides. Riding the bike helps me evaluate situations when I’m driving the car and vice versa. 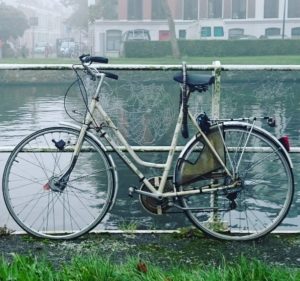 The Art of Getting and Locking a Bike

Most Dutch people have had their bike stolen at least once. It’s usually only after going through this experience that people learn to invest in good locks or parking facilities for their beloved bicycles. Using my Dutch friend’s Christi Westny-de Roo‘s words “Sadly, two good locks are a necessary investment to make for your bike in the Netherlands. Get a really good second lock and use it always.” Lock your bike to a lamp pole or something else that is steadily attached to the environment. And if your bike is stolen, it’s good to report it, even though the chances for getting your bike back are not great. [2] Christi also points out buying a new bike is not at all necessary and she thinks second hand is a better idea. But if you decide to go for a brand new bike, you will naturally get a guarantee. Christi adds that the bike insurance is quite expensive, but some people take it. Usually it depends if you are prone to parking your bike out in the public during the night. This said it’s evidently better for your peace of mind to try to park your bike inside during nights if possible in any way. To prevent theft further, having your post code engraved in the bicycle might be a good idea as well, according to Christi. And lastly she points out it’s better not to leave anything on your bike, not even a pump, as often anything that isn’t bolted down is an invitation to theft.

In a country of 16,8 million people and 22,7 million bikes, getting a bike is not the challenge, but getting the right one for you or a family member might take some investigating. Start by knowing the right frame size according to the height. Second hand bikes, tweedehands fietsen, are sold on- and offline. The recycling centers in Delft have a second hand section of different types and sizes of bicycles, but bikes can be bought in stores completely dedicated to second-hand ones. Online websites such as Marktplaats offer over 100 000 hits when searching for a “fiets”, and Facebook has countless sale groups where bikes among other items exchange owners. It’s only a matter of getting started.

A friend of mine, a bike enthusiast from Finland, has been jealously gleaming over photos and videos about biking in the Netherlands. “I bet you don’t have a traffic park for kids in the Netherlands,” he once said and added: “There the whole country is one big traffic park!” And that, ladies and gentlemen, is absolutely one of the biggest perks of riding a bicycle in a country with well planned bike infrastructure.

1 thought on “Bicycles and traffic for the newly arrived”